At a meeting of representatives of the state apparatus in May last year in Dushanbe, the President of Tajikistan taught functionaries about the pitfalls of corruption, reported occrp.


According to him, the republic (recall: the poorest state in Central Asia) regularly faces a budget deficit caused by "unprincipled" officials who turn a blind eye to the smuggling of undeclared goods from abroad.

“How do we fill the budget? Where are we looking? Hundreds of millions, billions pass by the treasury, ”Emomali Rahmon was indignant. 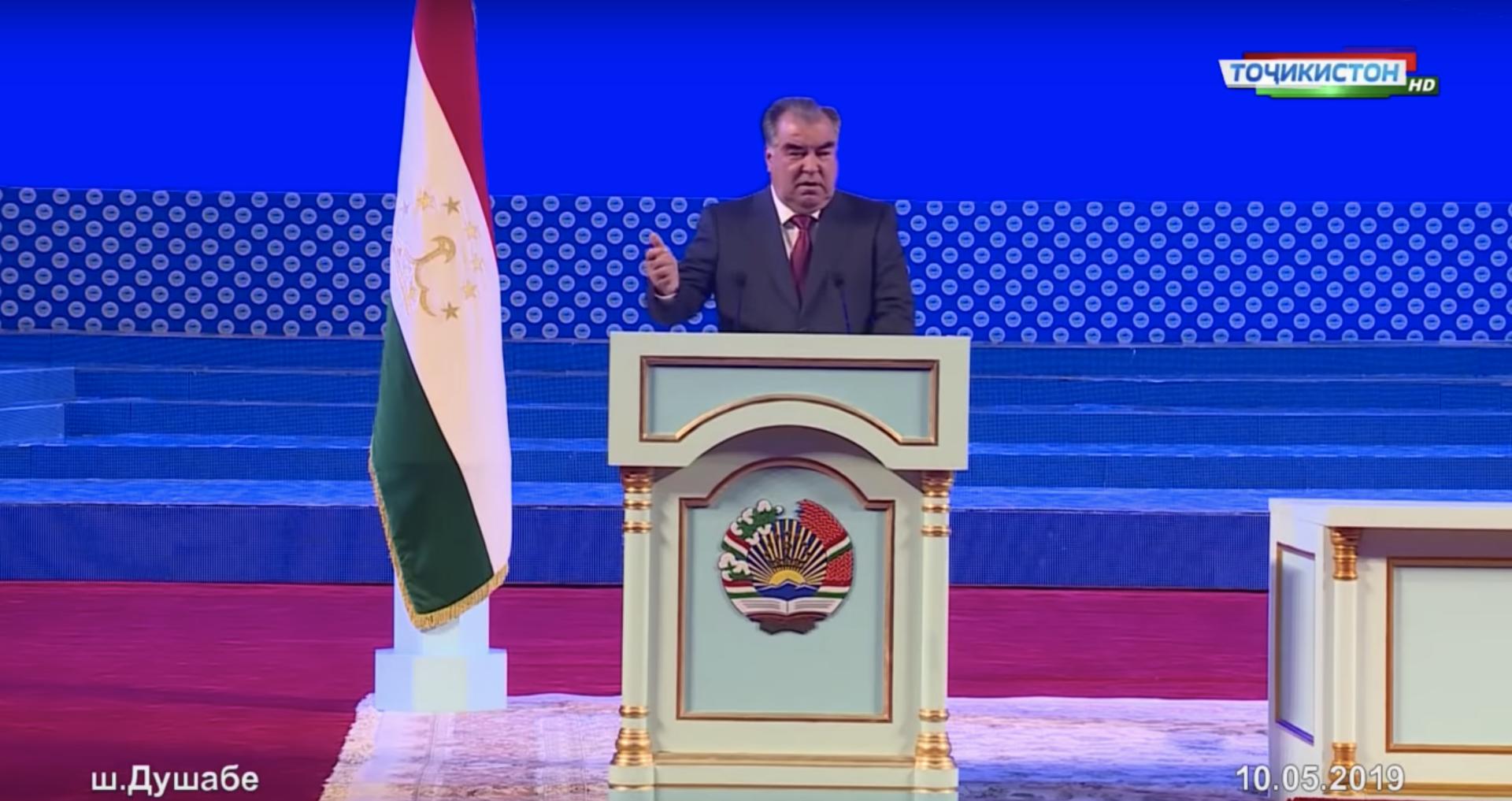 Image: YouTube  / President Emomali Rahmon speaks to government officials last May.
President Rahmon, who has always been ruling in Tajikistan for 27 years now, of course, can scam officials because of budgetary problems, but judging by the documents received by the OCCRP, his calls to comply with the law do not belong to his inner circle.

In March last year, by a presidential decree, Rakhmon exempted three Tajik companies (two of which are associated with the president’s family) from paying customs duties and VAT on various types of building materials and sanitary ware necessary for the reconstruction of hotels and health centers, such as ceramic tiles, laminate and shower sets.

Companies were allowed to import thousands of tons of fittings, toilet equipment and more than ten thousand square meters of floor tiles without taxes. In July, an additional decree was issued - he exempted from taxes a new list of goods for the final stage of repair work, including furniture and lumber from pine. Other companies are required to make customs payments for the import of such products.

Last year, the OCCRP published an investigation into the vast commercial interests of Shamsullo Sahibov, the husband of one of President Rahmon’s seven daughters. Journalists talked about how Sakhibov benefits from his own seed connections. In this he is assisted by the dominant position of the Faroz conglomerate in various sectors of Tajikistan, as well as the ability to squeeze competitors.

And now, OCCRP has found out that the Sahibov family clan, among other things, manages two companies that have recently received tax breaks, and can now reconstruct its “resort assets”. The resolutions signed by Rakhmon vividly illustrate the full scale of the president’s “special” attitude towards his relatives. 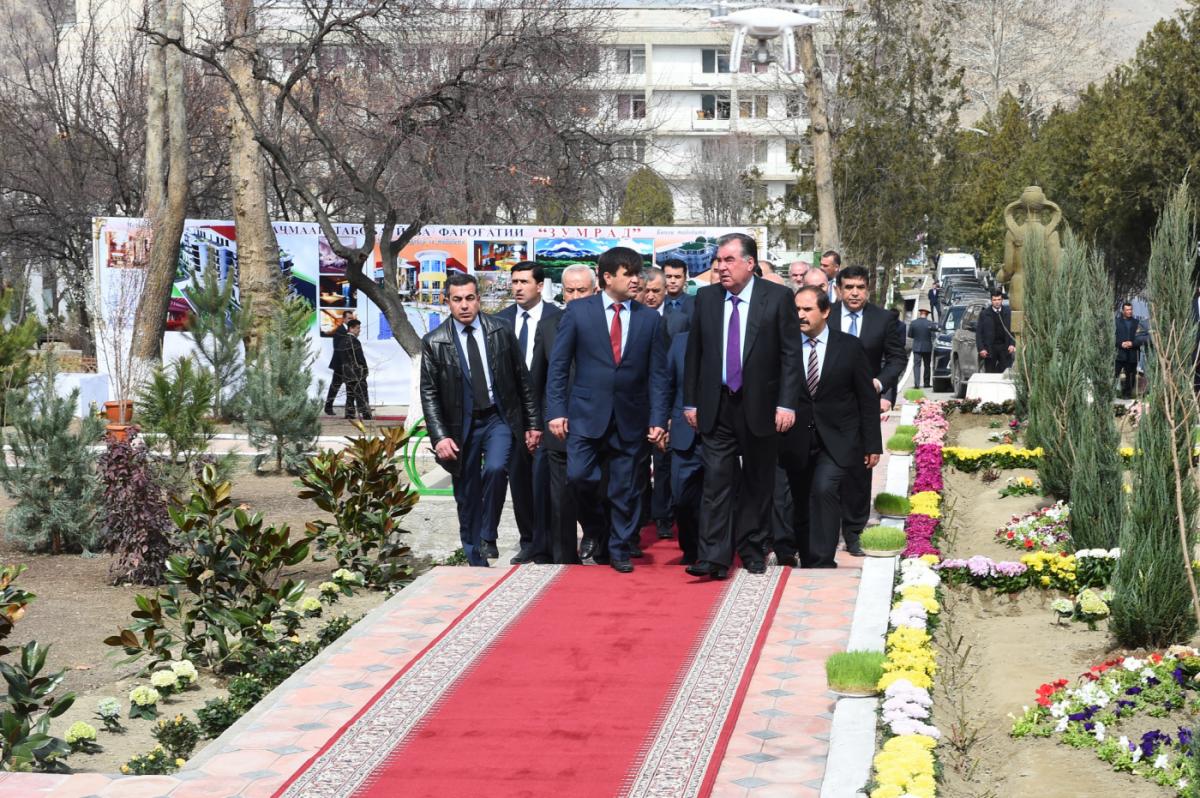 From the Soviet past to an ultra-modern level

Image: OCCRP  / Decree of July 2019 on the exemption of Zumrad, Ruhafzo-2015 and Dario-2015 from the payment of import duties on building and finishing materials.
The Zumrad therapeutic balneotherapy resort was built in the 70s of the last century on the banks of the Isfara River in northern Tajikistan - in a picturesque region on the border with Kyrgyzstan and Uzbekistan. The resort was famous for its mineral springs and healing mud throughout Central Asia.

Today, the sanatorium complex can accept 500 vacationers at a time. The cost of staying here varies from 11 to 25 dollars per day. Given the fact that the average salary in Tajikistan is $ 135, a vacation to Zumrad is unlikely to be affordable for most residents of the republic.

In April 2015, the government announced plans to privatize Zumrad and valued the sanatorium at nearly $ 1.1 million. By the end of September of that year, Somon-Sughd bought the shares of the sanatorium for about 950 thousand dollars, and for about 91 thousand dollars received 600 hectares of surrounding farmland. The beneficial owners of Somon-Sughd are two brother-in-law of President Rakhmon, and it is led by Narzullo Sakhibov, the brother of the presidential son-in-law. 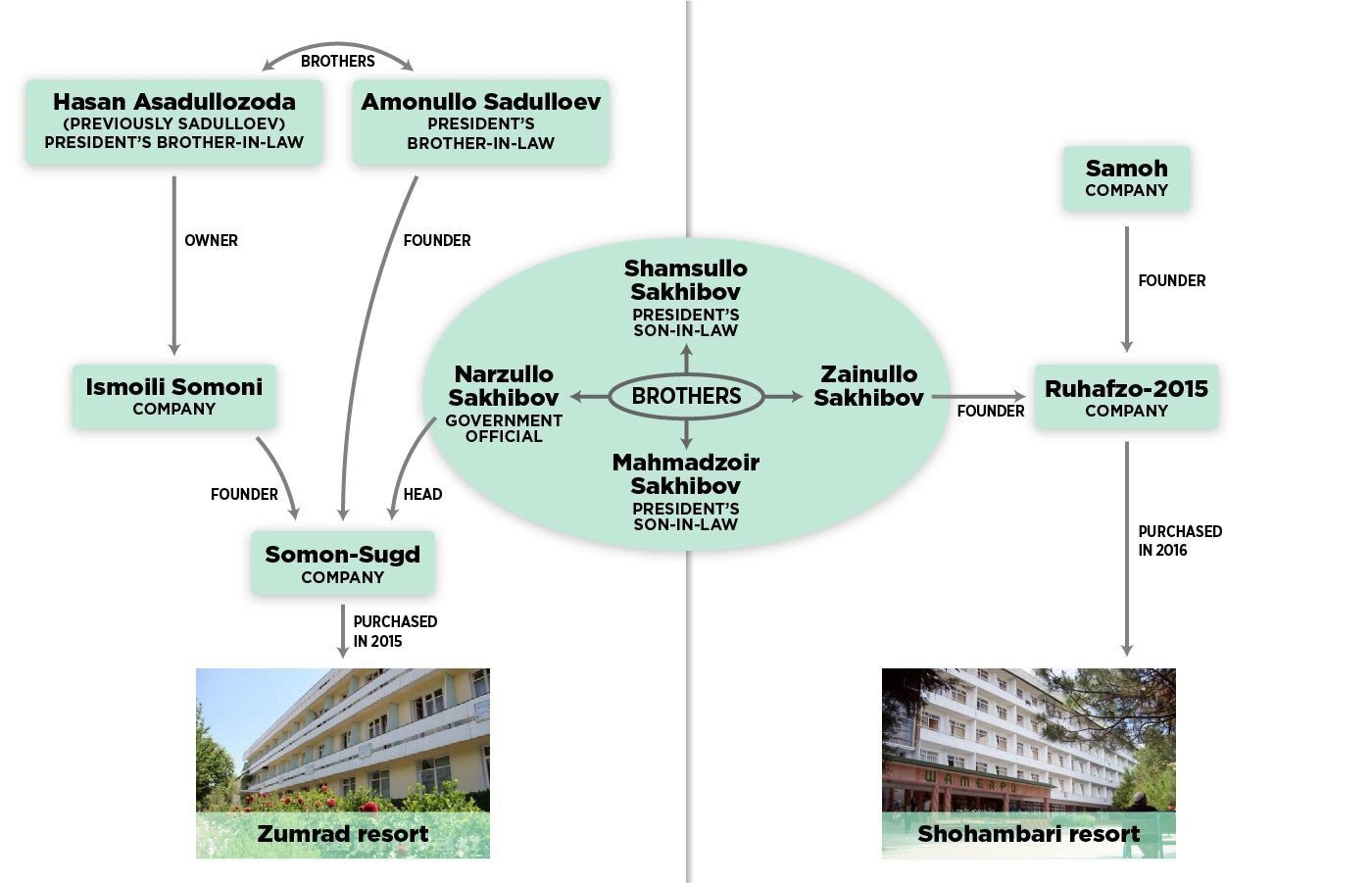 Image: OCCRP/Edin Pasovic
Since 2014, Narzullo Sahibov has been the deputy head of one of the departments of Tajikistan, and according to local anti-corruption laws, he is prohibited from owning commercial assets.

The resort "Zumrad" is currently undergoing large-scale reconstruction. By March and July decrees, the sanatorium was exempted from taxes on construction and finishing materials imported from abroad.

Another medical and health resort with a rich history, Shambari, was sold in June 2016 for $ 395 thousand to the company Ruhafzo-2015, also associated with the family of the president of Tajikistan.

The resort was built in the 50s on the hills near the city of Gissar, just 45 minutes by car from the capital Dushanbe. It successfully treats diseases of the gastrointestinal tract, musculoskeletal system, as well as vascular diseases of the nervous system. Doctors use mineral baths, bowel cleansing, various spa treatments. The sanatorium complex has 500 rooms, where you can accommodate up to 1000 guests. Its value at the time of sale is unknown.

The co-founder of the new owner, the company Ruhafzo-2015, was Zaynullo Sakhibov - another brother of the president’s son-in-law, as well as Samokh. It is not known who the owner of Samokh is, but in 2016, she and Sakhibov founded another legal entity, Farahnoz-1. 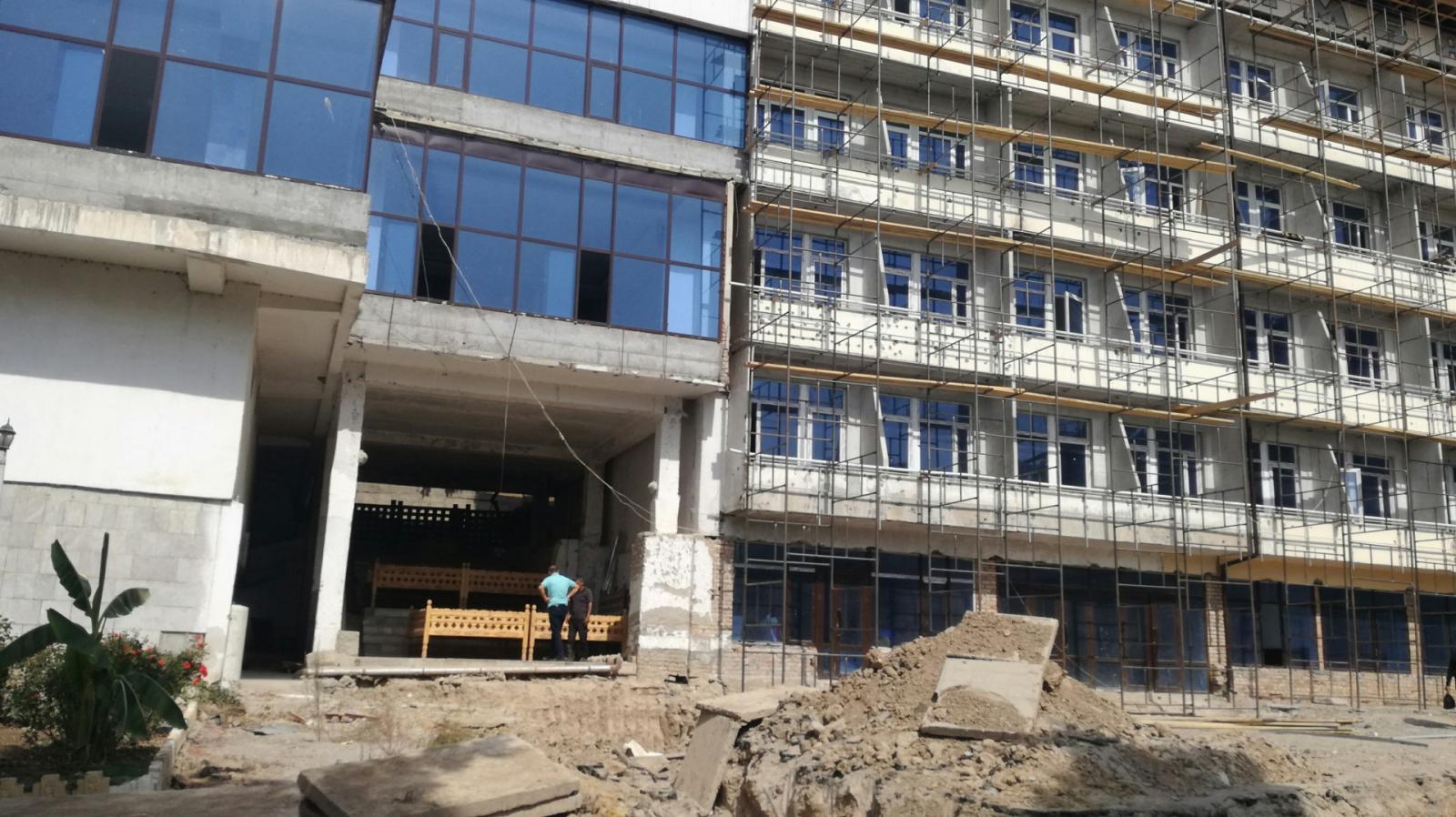 Image: OCCRP  / Reconstruction in the resort of Shohambari, September 2019.
Like Zumrad, Ruhafzo-2015 was exempted from import duties on construction and finishing materials by decrees of March and July, taking into account the reconstruction of the Shambari resort. The building of this resort is now covered with scaffolding.

Judging by the news in the media and the words of the resort staff, the husband of President Rahmon’s eldest daughter, Mahmadzoir Sahibov, regularly visits Zumrad and Shambari to monitor the progress of the repair work. A special series of photographs on the president’s official website illustrates how Makhmadzoir Sahibov personally conducts a survey of Zumrad resort for his father-in-law.

The third company mentioned in the decree on tax exemption is Dario 2015. It is unclear whether she is connected with the family of the president or not. Now the company is building an 11-story hotel in the Dangarinsky district of Tajikistan - in the small homeland of President Rakhmon. In 2016, the president attended the ceremony of laying the first stone in the building of the future hotel. 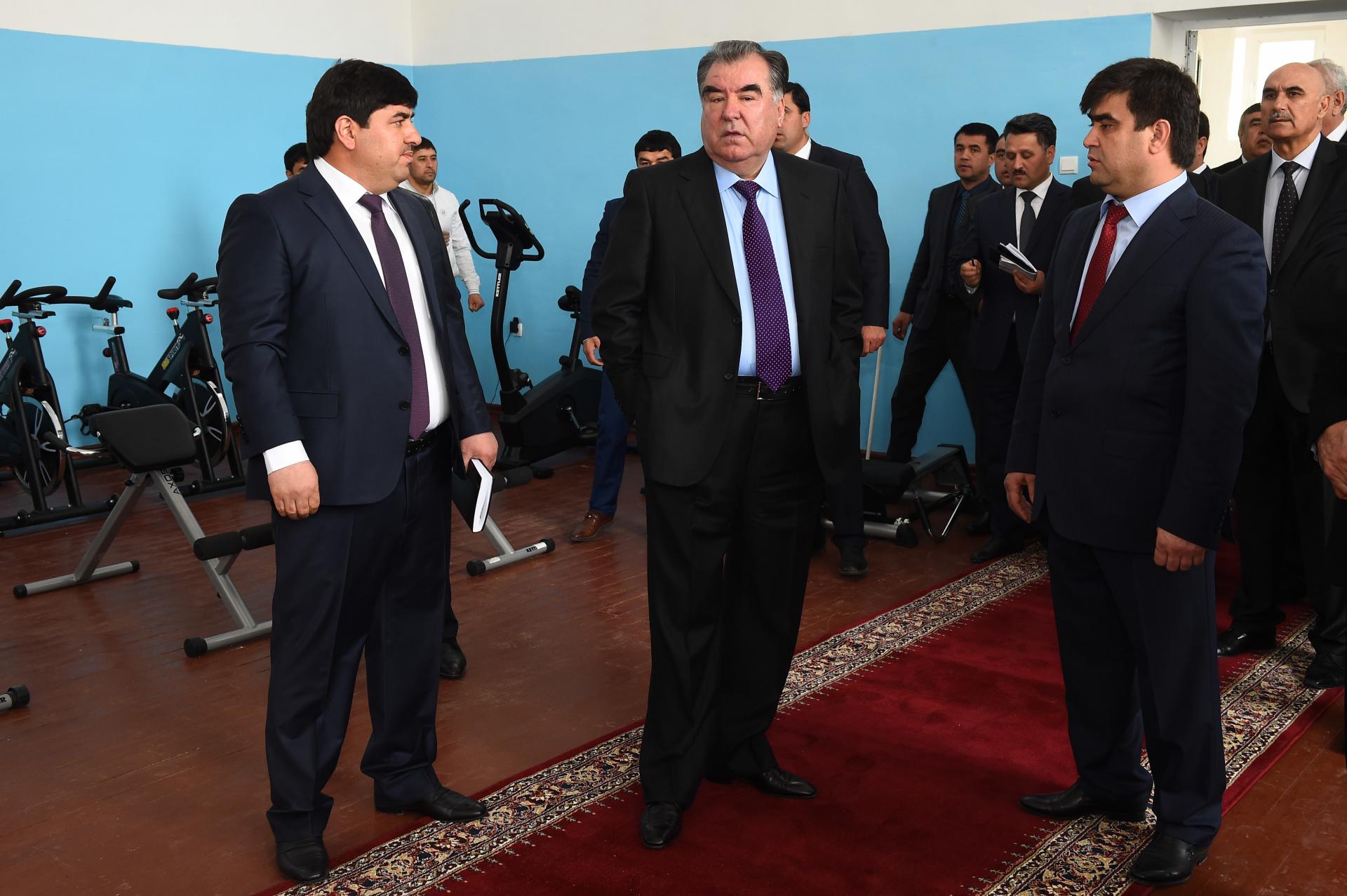 In the Tajik economy, the interests of presidential relatives are everywhere present - documents convincingly confirm this. Faroz Holding Company, under the leadership of President Shamsullo Sahibov’s influential son-in-law, is present in many industries, while gaining advantages over competitors.

For example, in 2015, “Faroz” with a big discount acquired land rights for the only ski resort in Tajikistan. A year later, at the opening ceremony of the resort, President Rahmon thanked for the implementation of the project "businessman-patriot", without naming his son-in-law by name. In 2018, the government of the republic approved a package of tax benefits for the tourism industry, including a ski resort.

In early 2016, Faroz invested heavily in driving schools, after which the authorities closed almost two-thirds of the driving schools that existed, allegedly due to the poor quality of training. The schools that remained on the market were obliged to use the Faroz-owned racetracks.

In addition, Faroz and its affiliated structure are the only ones who have received licenses for the collection, processing and export of asafoetida - resins of the ferula plant, which is used in cooking and traditional medicine. In 2008, the president decree forbade the population to collect asafoetida, although many poor people made a living by extracting this resin from wild plants and selling it abroad.

At the end of August last year, in a letter to the Government and the Customs Service of Tajikistan, Faroz CEO Azamat Kosimov announced plans to liquidate the company due to alleged financial insolvency. However, some experts suspect that this is only about the restructuring of the company against the background of the negative information background around it.

It can be stated that members of the Rakhmon family are now entitled to call both health resorts Zumrad and Shambari their own. Resorts replenished their already extensive commercial assets, which include customs terminals, shares in the banking, mining and other industries, as well as a ski resort, driving schools, and the collection and processing of medicinal plants.

And, of course, presidential relatives can say thanks to the government for the “timely” decree on tax benefits - now it’s not so expensive to reconstruct the resorts.