The sky spread wide over Russia. There is still something to steal!

The state-owned corporation Roscosmos, which became the champion in terms of budget violations, the amount of which amounted to 800 billion rubles in two years, failed to fill the federal treasury, the Accounts Chamber reports in an operational report on the execution of the federal budget for January-September. According to the results of 9 months of the current year, Roscosmos received 4 billion rubles less than the plan from the budget, finanz.ru reports.

The state corporation transferred 1.133 billion rubles, which is 5 times less than the amount laid down in the draft budget (5.28 billion rubles), the joint venture notes.

Even sharper - by 4.5 times, or by 276.1 million rubles - the revenues administered by Roskosmos decreased.

The expenditure plan is also almost half behind: in 9 months it was executed by 38.8% instead of 75% if the money were allocated evenly. The state corporation delays the transfer of funds to space industry enterprises, which should amount to 538 billion rubles for the year. 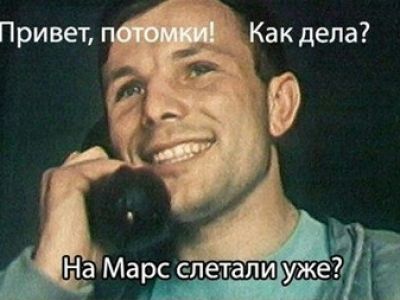 Image: Каспаров.Ru / Hello, descendants! How are you? Have you flown to Mars already?

The financing plan for the federal target program “Development of Cosmodromes for the Period 2017-2025 to Support the Space Activities of the Russian Federation” is being implemented with a three-fold lag: for 9 months, 27.8% of the money was actually allocated. Last year, funding for the program was failed: only 40% of the money reached the recipients.

Bringing funds to enterprises in 2019 was limited due to the program adjustment process, which ended in August this year, the press service of Roscosmos explained to TASS. “By the end of the year, the funds will be brought in full,” the representative of the state corporation assured. The lack of budget, he said, is associated with increased efficiency in the execution of government contracts. “Budget revenues from the state corporation are approved from the refund of funds received from termination of contracts and the recovery of fines from non-fulfillment of contracts by enterprises of the rocket and space industry. However, now Roscosmos is actively working to minimize the termination of contracts with the enterprises of the rocket and space industry and is trying not to bring the penalties from these enterprises, ”the representative of the state corporation explained.

In 2018, the Audit Chamber revealed violations in the space industry in the amount of about 50 billion rubles. In 2017, the department discovered 151 facts of violations in the work of Roscosmos in the total amount of 785.5 billion rubles. The first deputy head of the state corporation Maxim Ovchinnikov reported that the reports of the Accounts Chamber for 2014-2016 relate to financial discipline and the organization of the budget process.

The head of the Accounts Chamber, Alexei Kudrin, earlier called Roscosmos the champion in terms of the scale of financial irregularities. According to him, in the state corporation procurement procedures are incorrectly conducted, prices are too high.