China’s vice minister of public security, Sun Lijun, has been arrested for alleged “severe violations of party discipline and law,” the Communist Party’s top anti-graft body said late Sunday in what observers say is an indication of corruption, reported voanews.com. 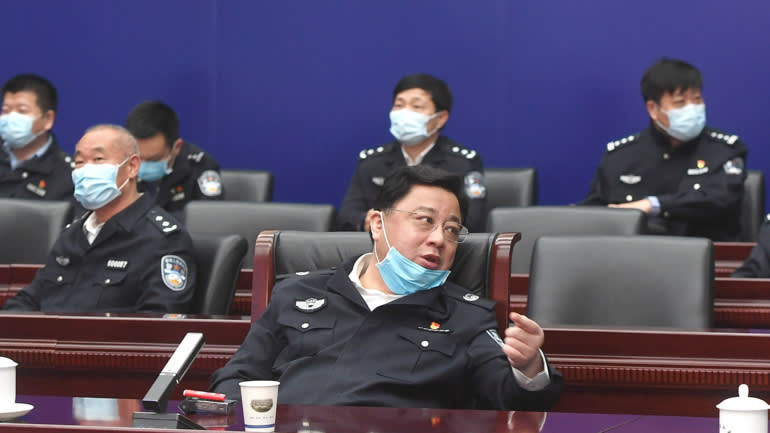 Analysts describe Sun as an “invisible hitman,” who had played a key role in top leader Xi Jinping’s past efforts to maintain social stability by rounding up dissidents including Falun Gong followers and rights lawyers during a 2015 crackdown.

They add that his arrest, which follows the jailing of former Interpol chief Meng Hongwei earlier this year for bribery, is baffling, but indicates undercurrents in Xi’s power fight amid the global coronavirus pandemic. There has been rife speculation that Xi’s authority has been seriously challenged after China failed to swiftly contain the outbreak.

“This isn’t a corruption probe. This is sending a chilling effect to anyone else inside the party, which allows Xi to control them with fear so that he can further consolidate his grip of power,” a rights lawyer told VOA on condition of anonymity. The lawyer likened Sun’s being purged to Mao Zedong-style infighting. Mao was founder of the People’s Republic of China and advocated strict Communist Party control over all aspects of life.

The lawyer said he suspected that Sun was ousted because he was seen as “not loyal enough.”

Another rights lawyer also said that, according to the ministry’s statement, Sun was accused of “being disrespectful” – an indication that he may be seen as disloyal to Xi.

Late Sunday, China’s Ministry of Public Security released a statement, throwing support behind what it calls the “timely and correct” investigation into Sun as it showcases Xi’s pledges to root out corruption.

The ministry said Sun “had long ignored the party’s political discipline and rules.”

Officials did not elaborate on the alleged corruption.

Instead, the ministry went to great lengths to explain how party members should pledge “absolute loyalty” to the core – a reference to Xi – and refrain from double-dealing as what they called a “two-faced man.”

Prior to that, he served as the ministry’s director of the office of Hong Kong, Macau and Taiwan affairs and a deputy director of the 610 Office, which was in charge of suppressing Falun Gong practitioners.

Sun was last seen in Wuhan by Xi’s side, helping to contain the coronavirus outbreak and keeping social order there. Wuhan was where the outbreak was first reported.

Exiled tycoon Guo Wenqui said that Sun was never considered a protégé to Xi since Sun formerly worked under Meng Jianzhu – the former secretary of the Communist Party’s Central Political and Legal Affairs Commission before 2017.

Image: Chinese President Xi Jinping, left, chats with former President Jiang Zemin during the closing ceremony for the 19th Party Congress at the Great Hall of the People in Beijing, Oct. 24, 2017.

Guo said both Sun and Meng belong to a group known informally as the Shanghai Gang, led by Xi’s political rival, former President Jiang Zemin. Jiang oversaw the return of Hong Kong from British rule and is credited with reforms that helped turn China into a global economic power.

The exiled tycoon called Sun a “murderer,” saying Sun should be held responsible for the persecution and torture of detained dissidents at home and abroad over the years. Guo also blames Sun for the seizure of the tycoon’s assets.

Guo also said Sun had stashed away assets worth of billions in his wife’s bank account in Australia, where Sun’s wife and 19-year-son currently live as citizens.

Thailand-based Wang Xili is a Chinese political dissident in exile and says he does not think Sun’s arrest is part of a corruption probe or due to political infighting. Wang says he believes the party is trying to use Sun as a scapegoat to cover up past wrongdoings in persecuting rights lawyers. Wang also says Sun himself also deserves blame for what happened during the 2015 crackdown.

“Sun Lijun was the commander-in-chief of the July 9 crackdown [against rights lawyers]. Many sources have revealed that all investigators [including state agents] had to report directly to Sun…Upon Sun’s arrest, [the authorities] will either doctor the documents or take whatever necessary actions before they seal up these documents for archiving and forbid anyone to read,” Wang said.

The political dissident said his personal experience with China’s security apparatus shows its latest shake-up is a tactic used by the Communist Party to shift blame so that Sun’s bosses, including Xi, won’t be held accountable in the future for the persecution of lawyers.

Sun’s arrest has sparked heated discussion on Twitter with some users calling his case a wake-up call to many of his party comrades, who will end up being sacrificed if they take the wrong side.

On Weibo, China’s Twitter-like microblogging site, thousands of online comments, however, were censored except for those that mostly voiced support for Sun’s arrest.