Not everyone liked the answer of scientists: part of the aid to poor countries settles in Singapore and other offshore

It flows directly into offshore, economists found out, and after analyzing all the options, they settled on the most plausible: part of the help is stolen by the powers that be. In poor countries - an average of about 7.5 %, in the poor - twice as large, up to 15 %.

Three economists, one of whom is an employee of the World Bank, presented their findings in last year’s study and routinely handed it over to the bank for discussion and publication. By November, everything was ready.

But the world only found out about their work in February and under scandalous circumstances: from two leading Western publications, one of which, the Economist, connected the lack of publication with the departure of the World Bank chief economist Penny Goldberg, who had not been in this position for a year and a half.

The Economist, followed by the Financial Times, described the content of an unpublished work and put the situation in the context of changes in the World Bank, which was recently led by its critic and ally of US President Donald Trump. They called the situation an alarming reminder that independent expertise and research sometimes fall prey to political expediency, which undermines the effectiveness of policies in general and of helping poor countries in particular.

Noise in the press took effect: first, a draft of a document entitled “Assignment of foreign assistance by the elites. Evidence from offshore accounts” was published “by agreement with the bank” by one of its co-authors. And soon the bank posted the study on its website without any noise. 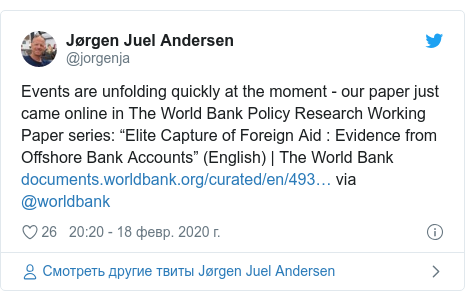 The bank said that it did not prohibit the publication, but only delayed it, because it still had doubts about the validity of the conclusions. Penny Goldberg did not explain her departure. Bloomberg news agency reported that bank head David Malpass wrote in an e-mail to employees that Goldberg was returning to Yale and thanked her "for her passionate desire to provide the bank with top-class research."

Anderson and a colleague several years ago investigated the phenomenon of the inflow of money to offshore from oil countries following the surge in oil prices. One of the World Bank economists became interested in the work of Scandinavian scientists, and soon the three of them started a similar project: to find out if this happens after international assistance arrives in the country.

They studied data on foreign currency transfers from two dozen countries, the most dependent on soft loans and World Bank grants. And they found out that as soon as these countries receive a substantial amount of assistance - more than 1 % of GDP, almost immediately out of them money begins to flow to offshore. An average of 7.5 % received. But they steal, perhaps more.

"Such a modest scale is the lower threshold, since they only take into account funds sent to foreign accounts and do not include spent on real estate, luxury goods and so on," the study said.

If the scale of aid increases to 3 % of GDP, which is typical of extremely impoverished countries due to the microscopic volume of their economy, the share of outflow doubles to 15 %.

"It can be argued, almost unmistakably, that the beneficiaries of foreign currency flows to offshore during the periods of aid allocation are representatives of economic elites. The exact mechanism for turning aid inflows into money outflows is more difficult to determine, but the most obvious and plausible version is the appropriation of allocated funds by politicians and officials," conclusion scientists.

And they explain why they dismantle versions of the legal origin of leaking capital.

Firstly, during the periods of the outbursts described, money prefers quiet harbors of banking secrecy like Zurich, Luxembourg, Singapore and the Cayman Islands. No recovery in the London or New York direction is not observed, despite their indisputable position of world financial centers.

Secondly, the assumption that money for completely legitimate tax optimization is withdrawn by companies that are contractors of projects implemented with World Bank funds does not stand up to criticism. The authors of the study used the statistics of the Bank for International Settlements, which takes into account the arrival of such money not as a transfer from, say, Armenia, but as an increase in deposits of a local offshore company, for example, in Bermuda.

Another possible reason for the outflow of currency to offshore companies - rebalancing of the portfolios of commercial and central banks - is also excluded in this case, since the study concerns only transfers of non-financial organizations and individuals.

They were chosen because the amount of aid relative to the size of their economy is significant, and the local banking system is not developed, or even completely absent - and therefore the outflow is clearly visible. For richer countries, a World Bank loan is a drop in the sea of ??money, and what exactly spills over the edge into offshore is almost impossible to determine.

The authors note that their findings support the results of previous studies. At the beginning of the century, in a number of works, economists proved that excessive external assistance can spur corruption and corrupt institutions, while the countries most dependent on foreign subsidies are among the least developed and most corrupt in the world.